That night there came a snow in the mountains and the valleys below
And I found a love that’s true I know in Taos New Mexico.” – Waylon Jennings 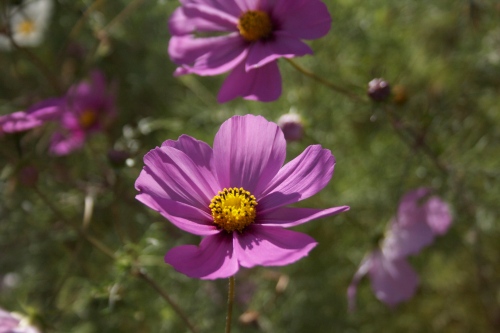 I went traveling, a journey through the Southwest. I left with the feeling that I could settle down in an old adobe under New Mexico’s powder-blue skies. Sante Fe – maybe Albuquerque, land of Breaking Bad and also as I discovered, a difficult city to spell.

We went to the Spirit of the Winds balloon fiesta and took the completely justified 1,000 pictures of hot air balloons (you’ll see those soon). We zipped north into Santa Fe, than Taos, then Colorado, honey-gold aspens winding through thick evergreen forest like a strand of garland.

We stayed at the Inn of the Turquoise Bear a historic B+ B in Santa Fe, formerly owned by the poet Witter Bynner and rented to his artist friends. Georgia O’Keefe. Ansel Adams. Carl Sandberg. I could write a whole post about that place and the food. Oh wow, the food.

I shopped South Congress in Austin, saw an armadillo in Houston.

But the Taos Pueblo stands out because it was one of those unexpected things you find in travel. 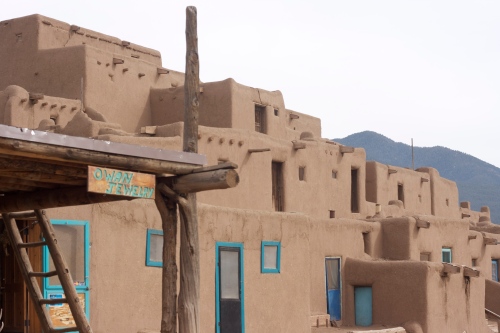 The Taos Pueblo is one of the oldest continuously lived-in residences in the US and one of the most private and secretive of the pueblo communities.

I didn’t even have it on my itinerary at first because we only had one night in Taos and I wasn’t sure about the timing or what I really wanted to see in the town. Touring the Pueblo is $16 per person. There are guided tours if you have the time to take one (which I sadly did not).

After touring the pueblo and observing some questionable tourist behavior, I would add:

I felt icky. Like I should not be there, but that I should see it. Like I should whisper, even though the day buzzed with construction activity. Camera-strapped tourists darted in and out of the shops and residences of the tribal members. Their language (Tiwa) is unwritten and there’s an expansive wilderness area behind the pueblo off-limits to non-tribal members. Running water and electricity are prohibited in the pueblo.

There’s a bell-tower from the original San Geronimo church, built in the 1600s when the tribe was forced into Catholicism by Spanish missionaries. That church was destroyed by US troops in the late 1800s (after the murder of Governor Bent) and many people died in the battle, so they turned it into a cemetery. But they built another church – its walls are smooth, a sandy color and topped by white crosses. The architecture of the church is extraordinary, but you still get the sense that the church doesn’t really belong.

I would rather my tourist dollars go to corn necklaces and fry bread made here, than those high-end shops that peddle overpriced turquoise rings. And I think interactions and access help dilute preconceived notions. But I cannot imagine what I would feel like if a bunch of tourists traipsed through my apartment to gawk at me.

Case-in-point: There was a twenty-something girl who had her boyfriend take a way-too-happy picture of her next to the sacred burial plot. The grin on her face might as well have been a thumbs-up.

Maybe I’m oversensitive. But then…

Where Do You Get Your Clay From? 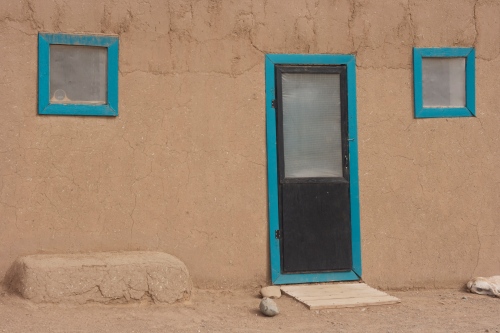 We met Gilbert, a Tribal member who works construction on the pueblo. The walls have to be rebuilt a few times each year because of weather. He demanded we try his sister’s fry bread, touting it as the best in Taos. We stood around making idle chit chat (about Jake the Snake Roberts) as she rolled out the dough. Near the door of the pueblo, a row of four stunning landscape photographs, taken by his nephew, who he proudly added, is “only 13.”

He told us we just missed San Geronimo Fest, where the men see who could climb a long, skinny pole the fastest. He pointed out his family members, who were rebuilding the walls and said he was trying to teach his cousin, “who didn’t know sh!t yet.” He then apologized to me for swearing.

While my husband and I were talking to him, a cargo-short-clad middle-aged dude walked up.

“I have a question,” Cargo Shorts announced. “Where do you get your clay from?”

I looked down to hide my arched, did-he-just-ask-that eyebrows, struggling to think of a different answer than the obvious. We were standing on dry mud, a little bit darker than the adobe walls. I briefly imagined wheelbarrows full of clay being shipped in from China or elves making clay in a factory or people walking for hundreds of miles in search of Home Depot so they could buy buckets of clay.

“Uhhh… from the ground. It’s everywhere.” Gilbert says, the corners of his lips turned up, suppressing a laugh. He softened adding, “It’s just mud and sticks and stuff.”

Cargo Shorts paused for a second then moved on. I don’t really know what he wanted.  I feel like I missed something too.

Watching them rebuild the walls struck a chord in my heart.   All the guys in the pueblo were together, moving clay around in pickups, shoveling debris off of broad flat roofs. Helping each other. And they’ve probably helped each other through some really tough things that I’m not going to pretend to understand because an hour at a pueblo doesn’t make me some kind of expert on their experience.

( I am now an expert on fry bread though. Believe me, I ate enough.)

But feeling of community and family was palpable.  And it reminded me of the lack of THAT in my own life.

On the bus, just a week after my visit to Taos and I think of how in Seattle, a smile is like an assault. How one even looks up from their devices to see if an elderly person has gotten on the bus. How my neighbors don’t know my name and I’ve lived in this building for over two years. I used to prefer this. I liked going through my day, no one asking me how I was, no one caring.

Maybe it’s the modern distraction or maybe it’s that I’m getting older, but it’s almost scary to me how little we know of our community. I could vanish and am 80% certain that none of my neighbors would remember seeing me (with the exception of my two neighbor-friends). Not that I want everyone in my business, but as humans we remember interactions. However, we’re not really interacting anymore.

We have electricity and wi-fi and Keurig coffee makers and freaking glasses where you can walk and surf the net at the same time. But there’s no connection.

5 thoughts on “Taos Pueblo Out in New Mexico”