Remember when I said I wanted a stalker? Not the scary kind, the kind that would anonymously send me my favorite flowers or take a bunch of scary but really cool monochrome photos of me walking down the street.

Ok, I never said that. It was one of those things you think about but you never dare say.

I was massively hit on in the form of an email approximately 5 hours after my first networking event.

My vision of networking is slightly dated, slightly 80s, gleaned from movies like Wall Street, American Psycho, and Working Girl that came out when I was a kid.

I put on my black blazer with the Murphy Brown power shoulders, slipped on my She’s Got Legs pumps and threw a stack of business cards into my purse. I am from Chicago where business event means dress like a real estate agent. Not so in Seattle. I knew my serious suit was a mistake as soon as I walked into the revolving door to find hip chicks clad in Anthropologie sipping amber ale, their hair twisted into high buns. 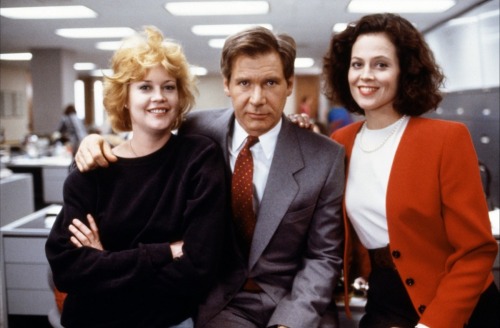 Is this ironic dressing now?

I guess I stood out.

Larry* also seemed out of place, slightly older than the crowd and under dressed wearing one of those rumpled tee-shirts they give out for free at music and beer fests.

Not that I cared. I was there to talk about travel and my writing work, hand out a few business cards.

He had lots of relevant experience. At some point during our conversation, I  mentioned my in-laws. He then asked if that meant I was married. I found that odd, but said yes, I was. The conversation turned back to business, so I thought nothing more about it.

I switched it up. Schmoozed with other people. Left in a cab excited about all the new travel and writing work that would come my way. And then sometime around 1:29 am I received an email with the subject line: FYI

I thought it was going to be an innocuous add-me-to-LinkedIn-then-never-talk-again email. Then I noticed his subject line had an exclamation point: FYI! I had to open it.

The email starts off with, “You are more than you know.” I know I am kind of a bad ass. Am I more than I know? I don’t know that I know.

In the third or fourth line, he writes: “If you weren’t married, I would ask you to work with me, travel with me…maybe even live with me.”

Guh. Whatever happened to just asking someone for coffee? Not that I would have accepted, being a very.happily.married woman. But really, this guy has no idea about my Girl Scout cookie addiction, my annoying habits of misplacing keys and hoarding BIC pens that no longer work.

And he wants to live with me? I am no picnic Larry, let me tell you.

And traveling with me is no fun either because I get hangry and my feet hurt and people throw things at me.

The email went on. The best line: “There is a part of you that is untapped and needs to be touched so it can blossom.”

Quick, what does vomiting look like in onomatopoeia? Hu-uh, Hu-uh, hu-uh, splash. The letter ends with how he thinks of me as a friend and if ever I am in need of someone to go over ideas with, I should call him to brainstorm. Oh and that the “world is waiting to see what I will do.” Well, World. I hate to tell you this, but my biggest accomplishment thus far is watching every episode of Dawson’s Creek and making near-perfect stovetop popcorn.

After I read his email, I laughed for a good three minutes. Then I checked all the locks.

*I really don’t want him to find this, so I changed his name. He looks like a Larry.